It’s dairy’s turn for the Ahuwhenua Trophy, and the top three finalists have been announced.

The three finalists – Pouarua Farms in Ngatea, Tataiwhetu Trust in Whakatane and Tunapahore B2A Incorporation in Opotiki – have showcased the best of their dairy operations at open days. The winner will be announced at an awards dinner on May 14.

Ahuwhenua Trophy was inaugurated by visionary Maori leader Sir Apirana Ngata and the Governor General of the time Lord Bledisloe almost 90 years ago.

The Ahuwhenua Trophy remains the pre-eminent accolade to win in Maori farming and is recognised as the most prestigious and comprehensively judged award in New Zealand.

The entrants, finalists and eventual winners all share and live the enduring values, goals, and vision of Sir Apirana Ngata and the competitive spirit of Lord Bledisloe.

This 2200ha platform on the Hauraki Plains in Thames valley comprises of 10 farms – nine dairy units and one drystock unit.

This is the largest single dairy platform in the Hauraki region, with 4600 cows milked across 1775ha and producing about 1.65M kgMS.

Pouarua Farms are now fully operated by the iwi owners under a limited partnership arrangement.

Since taking on full operational care in May 2019, significant productive and financial gains have been achieved by careful execution of management led by chief executive Jenna Smith.

Milking 600 cows on 217ha through a well-equipped modern 54 bail rotary shed, the farm is the vision of its owners, with practical technologies and careful consideration for the environment.

The Tatauwhtua Trust property is located in the Ruatoki Valley, south of Whakatane.

They milk once a day and run 432 Kiwi cross cows and have 188 replacement stock on two supporting blocks.

In 2010 the trust received the Ballance Farm Environment Award for the creation of special places on the farm including the protection and enhancement of wetlands, landscape features and historical places.

A year later, in collaboration with Tuhoe Putaiao, the trust received the Green Ribbon Award for protecting biodiversity.

In 2014, the trust was presented with the Fonterra Gold Grade-Free Certificate in recognition of excellence for consistent supply of the highest quality milk, and in 2015 the Tataiwhetu Trust transitioned from conventional milking to organic and is now fully certified by Assure Quality. In 2019 it received the Fonterra Organic Certificate.

Originally one whole landmass located between the two coastal points of Hawai, the Maori Land Court met and decided to split the land in 1953, hence Tunapahore B2A and Tunapahore B2B. 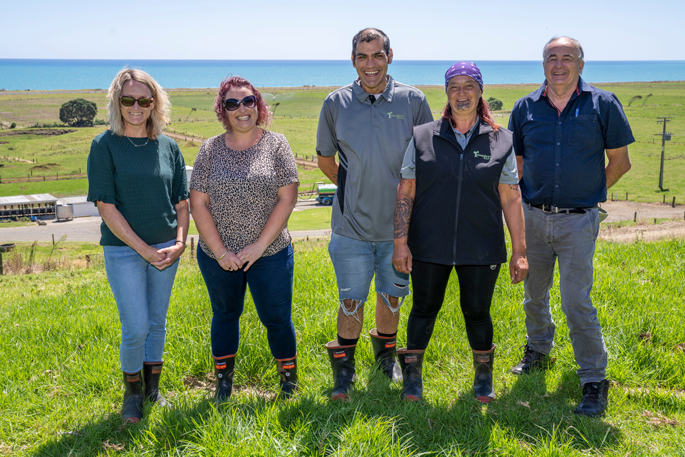 Some of the team from Tunapahore B2A.

The Tunapahore B2A Incorporation farm consists of 376ha located at Hawai and Torere on the famous State Highway 35 on the East Coast of the North Island.

It was operated as a dairy farm, originally with a farm manager and later, for many years, with 50/50 sharemilkers.

The current farm manager, Janet Poihipi, who has worked for a number of years on the farm under previous sharemilkers, is regarded as an absolute asset to the Incorporation.

Local help for your business needs