Bill Reymer is the proud owner of a 1973 Massey Ferguson 148 tractor, which he restored himself. The tractor belonged to his late father, John, and has been in the family for 48 years.

John Reymer Snr and his wife Betsy emigrated from Holland in 1952 and were dairy farmers and rural contractors in Tihiroa, Otorohanga District.

The 148 spent most of its life mowing and baling for the Reymer family’s contracting business, plus general farm work. “Somehow it managed to escape being traded in over the years,” says Bill.

John Snr passed away in 2008, and by 2014 the little Massey was sitting abandoned in a paddock, until Bill pulled it into one of the sheds in 2017.

A tractor enthusiast from a young age, Bill had served his mechanic apprenticeship working on tractors. He joined the Otorohanga Vintage Machinery Club later in life and now has a collection of 10 classic tractors. “My whole life has been spent around tractors. I reckon I’ve got diesel in my blood!”

Inspired by meticulous restorations he saw at the club, and with the 10th anniversary of his father’s passing approaching, Bill decided to tackle the MF 148’s restoration with a view to it being part of the celebrations.

“It was a complete restoration with pretty much every part requiring an overhaul or replacement.

“I also wanted to achieve the rebuild using original parts wherever I could.”

Bill found original parts in various tractor enthusiast friends’ sheds around the Waikato, and some new replica parts from Waikato Tractors. Others, including the seat cover, were imported from the UK.

The spraypainting was carried out by Bill’s son Michael, using original Massey Ferguson colours of Super Red and Stoneleigh Grey.

The tractor was finally completed in time to be shown at the opening of three of Bill’s sisters’ new café ‘Zenders’ in Newstead.

There was a big gathering of family on the December 5, 2018, when Sinterklaas is celebrated by the Dutch. Bill drove his father’s restored MF 148 to the party, and distributed gifts and sweets as is the tradition.

“Everyone was thrilled with the tractor, especially the signwriting on the bonnet commemorating Dad.”

The tractor’s future also seems safe as Bill’s sons are keen, and the grandchildren are showing strong interest. 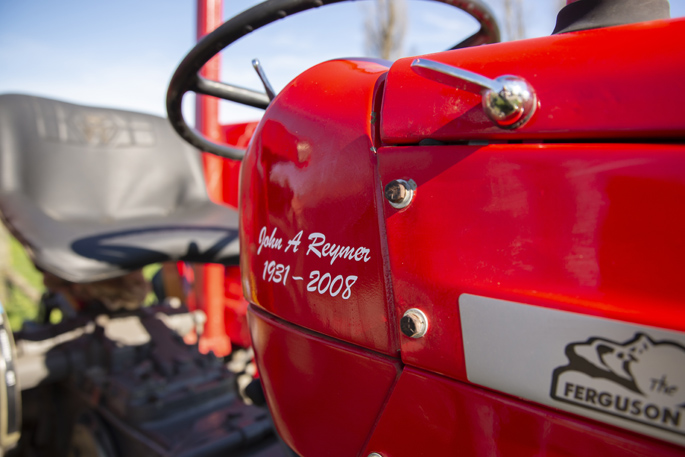