Farming and the mine

Mining and farming don’t seem like a likely pair – one relies on what’s on the land, and the other extracts from beneath it. But OceanaGold Waihi is proving the two can work in harmony.

The company own three blocks of farmland around their Waihi processing plant totalling 220ha, which is leased to and managed by three neighbouring farmers.

“We’re proud of the way we’ve managed to make the mine, farms and storage ponds function together, which we’ve been doing, and improving, since going underground in 2004,” says OceanaGold site project manager Kevin Storer. “With the help of our neighbouring farmers, we have beautiful land surrounding us.”

The farms’ daily operations are unaffected by what happens below, says Kevin. Being beneath a town of 4527 people, OceanaGold Waihi is used to mining in a way that creates minimal effects above ground.

This is achieved by carefully calculated placement of explosive charges, which detonate a microsecond apart and break the rock with minimal vibration on the surface.

Usually, the most impact felt above ground can be compared to a truck passing a house, so farming can continue as normal.

At the end of the 2017 season, OceanaGold signed an agreement with three neighbouring farmers, making them the managers of one OceanaGold block each – an extension to their own farms.

Prior to this, OceanaGold leased the land, and was responsible for the maintenance. “Our neighbours are great farmers. The land is always incredibly well kept,” says Kevin. “Maintaining it ourselves worked okay but farming isn’t our profession, so we’re really happy with the decision.”

About 48ha of OceanaGold’s south block is constructed from extracted rock from their open pit operation. The mounds are called Tailings Storage Facilities, or TSFs.

“The mine construction material isn’t harmful in any way, it's just normal rock out of the ground. You can’t tell the difference between the land on south block and the adjoining farmland,” says Kevin.

Both TSF mounds have been rehabilitated with topsoil, sown with grass seed and converted into farmland, with a significant area dedicated to riparian planting. “Within three months of sowing everything’s green, and by the next season it’s being farmed.

“The South block is quite steep, so the farmer running it tends to only graze young heifers up there.”

The mine has one operational TSF pond that stores tailings and excess water from the mining process, and rainfall. Water is sent from the pond to an onsite treatment plant, before being discharged into the Ohinemuri River.

The mine’s second TSF, named TSF2, was decommissioned in 2006. “The water in TSF2 is high enough quality to run directly into the waterways with no processing required.” 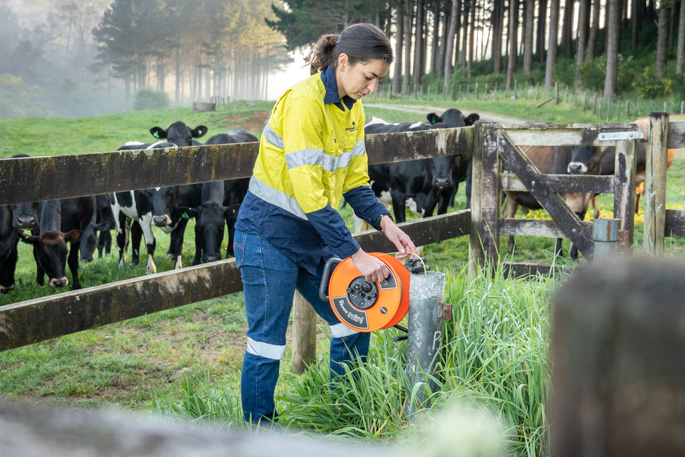 The active tailings pond is regularly tested. “Anomalies rarely happen, and if they do it’s usually just a matter of adjusting the PH levels – no different to what you’d do on a normal farm.

“People’s perception is that the pond is full of toxic material. There are trace elements of different minerals in there, but these are removed at the treatment plant.”

The water treatment plant’s polishing pond – the final stage before the water is discharged into the river – is clean enough to swim in. And people do. OceanaGold host a winter swimming event, called the Walrus Swim, every year. Fittingly, the winners receive a Walrus trophy. “It’s not just clean water for a mine – it’s considered clean by national standards,” says Kevin.

Bringing in the birds

The area around the two TSFs has attracted breeding pairs of endangered New Zealand Dotterels. It’s believed to be the only inland Dotterel breeding site in the North Island. “There are plenty of ducks and swans too, even on the active tailings pond. If you go there during duck season, it’s covered in them.”

As well as water testing, OceanaGold’s health, safety and environment team do regular sampling on all sites, and independent tests are carried out. All data is reported to Waikato Regional Council.

“We get annual soil test reports from the farmers and run our own extensive sample and testing regime,” says Kevin. “We manage trends through our database to ensure we’re not negatively affecting our surrounding environment.”

In the early days, OceanaGold worked with Massey University to complete yearly soil testing. “The university helped ensure the converted farmland was to standard, which created an opportunity for students to engage in the process.”

If OceanaGold’s proposed Project Quattro is approved, constructing another TSF will be permitted. Once mined, OceanaGold will stick to the same process, using leftover rock to construct farmland. “Leaving behind usable land, when the mining is over, is part of our duty of care.” 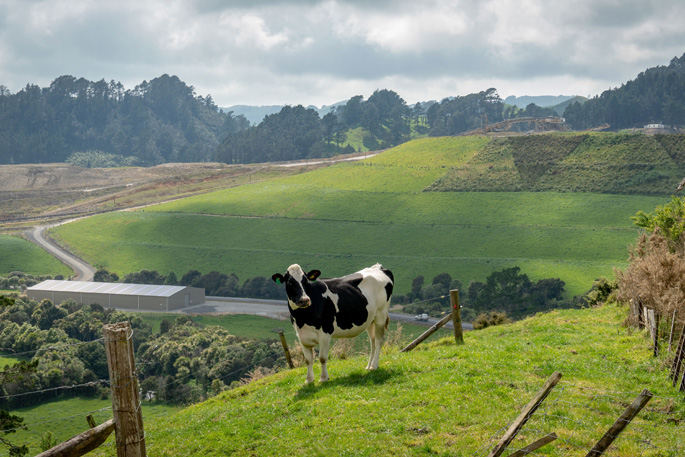 A cow grazing with the processing plant just over the hill. Photo: supplied.