Retired dairy farmer Colin Pinkerton and his circa 1920s winnower.

Retired dairy farmer Colin Pinkerton has been farming a smaller block on the outskirts of Te Awamutu for the last 17 years. He has also amassed a substantial collection of machinery, ranging from horse-powered farm machines mainly from the 1920s and 1930s to old cars.

One of his rarest pieces, is a manual winnower, which he has restored to good working order. The heritage green painted machine has cast iron plates with its serial number of 4375, and its maker – Henry Cooch from Harlestone, Northampton in England.

He has only once seen another one, and that was in the UK. Colin’s cousin in Manawatu had pulled No 4375 out of a rubbish dump around 40 years ago. “It had sat in his shed for 30 years, rotting slowly, until he offered it to me,” says Colin.

Once he had it in his possession, Colin restored it himself. “It actually wasn’t in too bad a condition.

“The bottom had rotted away so I replaced all the timber and treated the remaining wood for borer.”

Colin could see some of the old paint colour, and after stripping and sanding all the wood, he applied a similar heritage green paint.

To ‘winnow’ means to blow air through something, and in this context it is done to remove the husks from seeds.

“It would have been mainly grass seed, but there are several well-preserved metal mesh seed trays of different size, and a gauge which indicates they could have fed other seeds through.”

The wooden blades of the fan housed in the body of the machine are original and the cast iron gearing and cogs system was also in surprisingly good condition.

“That type of iron doesn’t rust much, so a rust treatment and a coat of paint brought it back to life.”

A friend turned a lovely piece of wood for the handle.

Colin predicts it probably took three men to operate the winnower. One to pour seeds into the top, one to turn the handle and operate the seed gauge, and one to collect and bag up the resulting chaff and husks. It may have sat in the shed or been hauled out into the paddock.

It takes at least three to move it now, and it’s raised off the ground on a macrocarpa frame so the wood doesn’t get wet and rot.

Colin is still adding to his collection, and enjoys coming across rare pieces from the earlier days. 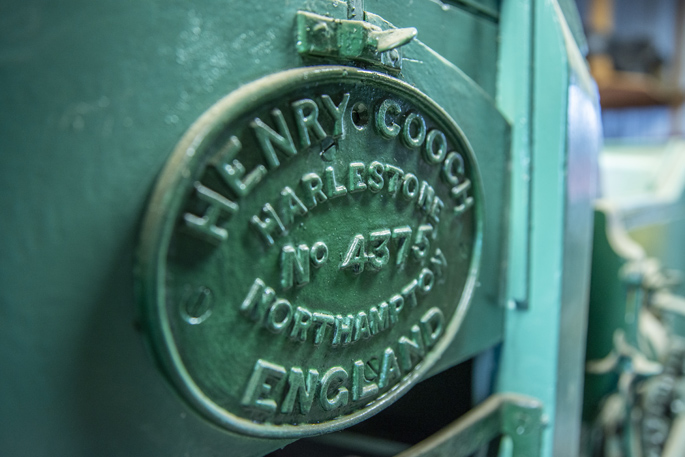